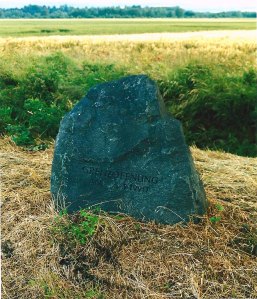 It was Easter Sunday, 1978. An early lunch had been eaten; there was just time for a quick blast of fresh air before the relatives arrived for kaffee und kuchen.

It was a time of firsts for me. My first holiday without my family. My first trip outside the UK and my first visit to Germany. The beginning – though I didn’t know it at the time – of a lifelong relationship with that fascinating country and its people. I was a fourteen year old school exchange student who, with my classmates, had anticipated with eagerness swapping the mundane routine of life in England for the supposed exoticism of Schladen, in the Landkreis of Wolfenbüttel in the Land of Lower Saxony. My expectations had been confounded, for what struck me most about life in that quiet corner of West Germany was not the differences but how familiar so much of it seemed, from the brand names in the shops to the groups appearing on Musik Laden, the West German equivalent of Top of the Pops. Half a century of British-German belligerence had melted away in the shared experience of Kate Bush and Boney M, of teenage hormones and new best friends.

All this was about to be put into its geopolitical context. We piled into the Wolter family Mercedes and took off down the Schladen-Hornburg road, a route I had already travelled a dozen times during my short stay. Halfway between Schladen and the picturesque medieval town of Hornburg itself Herr Wolter made an abrupt right turn, taking a route that was narrower than the main road and which, after a short distance, became narrower still. The reason for this soon became apparent, for the road didn’t lead anywhere. Not any more. Though the village of Göddeckenrode could be seen clearly in the distance, it could not be reached. The way was blocked by a wire fence, a ploughed strip, soldiers – in short, the chilling paraphernalia of the inner German border; Churchill’s Iron Curtain in all its forbidding glory.

It wasn’t merely the fence, or a minefield, nor even the East German border guards barring the way; all the tectonic might of the East-West standoff rendered that country road to Göddeckenrode impassable. We pulled into in a little car park to the left of the road, just below a wooded rise on which stood a concrete watch tower. As we got out of the car the guards in the tower kept a wary eye on us – an unsettling experience, made surreal by the litter bins and advertisements for western ice cream brands that gave the car park something of the atmosphere of a tourist destination.

We didn’t stay long; the brute fact of the Iron Curtain aside there wasn’t much to see. I remember thinking that all the cozy familiarity of western life came to an abrupt end here. This was the end of the world. Later I learned that it wasn’t quite that simple. The previous autumn had been among the least cozy in West Germany’s brief history, as the authorities played a bloody game of cat and mouse with the Red Army Faction guerillas. And the western world of Abba and McDonalds, of Volkswagen and Adidas – my world – didn’t end quite as abruptly as I thought, for though the products themselves were not available in the east, the iconography of capitalism was. West German TV ensured the brand names were beamed freely into East German homes. Even so, Göddeckenrode was as physically remote as Vladivostok, though it lay a scant few hundred metres beyond the border.

It took me 29 years to finally reach that East German village. On a drive through Germany in the summer of 2007 I stopped for old times’ sake in Schladen. The farm where I had stayed, the nearby inn, even the village itself – all seemed familiar and unchanged. I wanted to see Hornburg again too, but before I got there, an unremarkable-looking side road caught my eye; though a quarter of a century had passed I recognised it immediately, and I turned right off the Bundestrasse 82. The topography had changed little: the same low, wooded rise, the same flat foreground. But the political landscape had changed utterly. Where once a fence and an army had barred the way, a simple stone now commemorated the reopening of the German-German frontier. As memorials go it was a little too low-key for car parks or ice cream advertisements. But the few minutes it took to drive the short distance into the village beyond it felt inexpressably momentous.

To King’s Cross on a sunny winter afternoon, to evaluate at first hand the new public space that has replaced the sorry mess of prefabricated mediocrity that blighted the front of the station from 1972. It achieved a certain notoriety on the night of the King’s Cross fire, when it became a visual metaphor for everything that was wrong with Britain’s dilapidated transport infrastructure as the Thatcher years reached their apogée.

When the new square was unveiled in the autumn of last year the London-based national press gushed with the sort of onanistic hyperbole only the truly parochial can do, lauding it as though the Piazza Navona had mated with the ice rink in front of the Rockefeller Center to produce the very acme of urbanism al fresco.

The truth is somewhat more prosaic. The square is handsome enough but it’s functional rather than decorative; more Ryanair Square than Place de la Concorde. There’s a distinct shortage of baroque fountains, hissing espresso machines and Audrey Hepburn lookalikes. And there’s little that can be done about the British climate.

The real surprise is how fine Lewis Cubitt’s austere station building looks now that it has been so splendidly refurbished. It is the pièce de résistance of the King’s Cross regeneration. The neighbourhood I called home from 1988 to 1991 is looking better than it ever did, and the new development is, for the most part, progressing with tact and sensitivity towards the area’s existing landmarks.

If I have a reservation about it, it’s that regeneration in London so often goes hand in hand with gentrification, which suggests British planners have yet to find a way of successfully reinvigorating existing communities rather than supplanting them with newer, wealthier ones. I can’t help but think that amid the welter of advertising agencies and tapas bars the existing working class King’s Cross is being quietly edged aside.  Perhaps it doesn’t pay to be too sentimental about the old King’s Cross: this was an insalubrious part of the capital where the traditional street trader’s cry wasn’t ‘who will buy?’ but ‘fiver with a rubber, dear?’

And yet I wonder where all this is heading. One day, when everywhere in inner London has been regenerated, gentrified or otherwise re-imagined for the affluent, where will the ordinary people live? Will they be told – as inner London residents are already being told by the crasser sort of backbencher – that they must leave their homes because improvement has made them suddenly desirable?

We live in an age in which politicians seem to wish the poor would simply go away. Too often, regeneration seems like the physical manifestation of that uncharitable impulse.  And no amount of tasteful new paving can disguise it entirely.