I stood in the lobby of a French hotel in a German building, in the German district of a French city, chatting in my Belgian-accented French with the receptionist, who replied in German.

I’m fascinated by the cultural and linguistic shatterland between French and German Europe, which extends all the way from Charlemagne’s Aachen in the north to the Matterhorn in the south. Here, bier faces off against baguette and sauerkraut becomes ineffably French by the simple expedient of changing its name. On old maps German Aachen resurfaces as Francophone Aix-la-Chapelle and French Thionville as the thoroughly German-sounding Diedenhofen. In the midst of all this the people of Luxembourg converse in their own High Germanic language and the good folk of Neutral Moresnet mourn the loss of their quasi-independent statelet, which once drove a microscopic wedge between Belgium and Germany. Or perhaps not, since it disappeared in the redrawing of boundaries that followed World War One and there is no obvious clamour for its return.

Nowadays these are the most convincingly European of all European regions, where crossing from one country to another involves nothing more than a slower speed limit and a brief glimpse of abandoned buildings. A hotel receptionist in Saarbrücken will advise you to wait until Luxembourg before filling up with fuel, because it’s cheaper there. The shatterland is now the land of Schengen, a village on the Moselle at the point where France, Germany and Luxembourg meet. It gave its name to the treaty that opened borders and, more than this, opened minds.

The shatterland wasn’t always quite so at ease with itself, which brings me from Schengen the short distance upstream to Metz. The city’s history, like that of so many places in this part of the world, is a study in ambiguity. Once part of Roman Gaul, it was later a Merovingian capital and later still a free city within the Holy Roman Empire. It first become French in 1552, but its citizens were independent-minded and its Frenchness wasn’t finally confirmed until the Treaty of Münster, which ended the Thirty Years War in 1648. During the course of the seventeenth and eighteenth centuries Metz became one of the most heavily fortified towns in France. And then came the nineteenth century, the rise of nationalism as a political force and with it the rise of Prussia, the most powerful of the German states. Bismarck’s telegraphic mischief and the French overreaction to it brought war in the summer of 1870, and by the end of October the besiged city fell to Prussia. It would remain part of the German Empire for almost half a century. Unable to bear the thought of German rule, many left the city.

The long imperial summer was time enough for the city on the Moselle to be transformed. The old medieval fortifications were dispensed with and a new district, nowadays known as the Imperial Quarter, laid out to the south of the historic centre, with a palatial railway station as its focus. If Metz was not willingly German, its German interlude at least left it modernized and improved, for the imperial impulse motivated Metz’s German architects to build handsomely and well, and the Jugendstil villas and historicist apartment buildings of the nineteenth century city are very fine indeed, the equal of anything in the more exclusive bits of Wiesbaden or Dresden. The areas around railway stations are so often a city’s seediest quarter that it comes as a surprise to discover the Quartier Impérial is quite the most elegant in Metz.

A walk north from this Germanic townscape peels back the layers of Metz’s history. The public buildings ranged around the giant Place de la République have the chilly hauteur of Parisian officialdom, as assertively French as the railway station is bombastically German. The public gardens fringing the river Moselle are quite ravishing; the historic city beyond them is where Metz’s various identities meet and mingle. A shopfront as foppishly Art Nouveau as a Parisian metro station is juxtaposed with steeply Germanic rooflines; the oldest opera house in France stands in glacial Neoclassical contrast to a protestant church of purest Rhineland Romanesque. 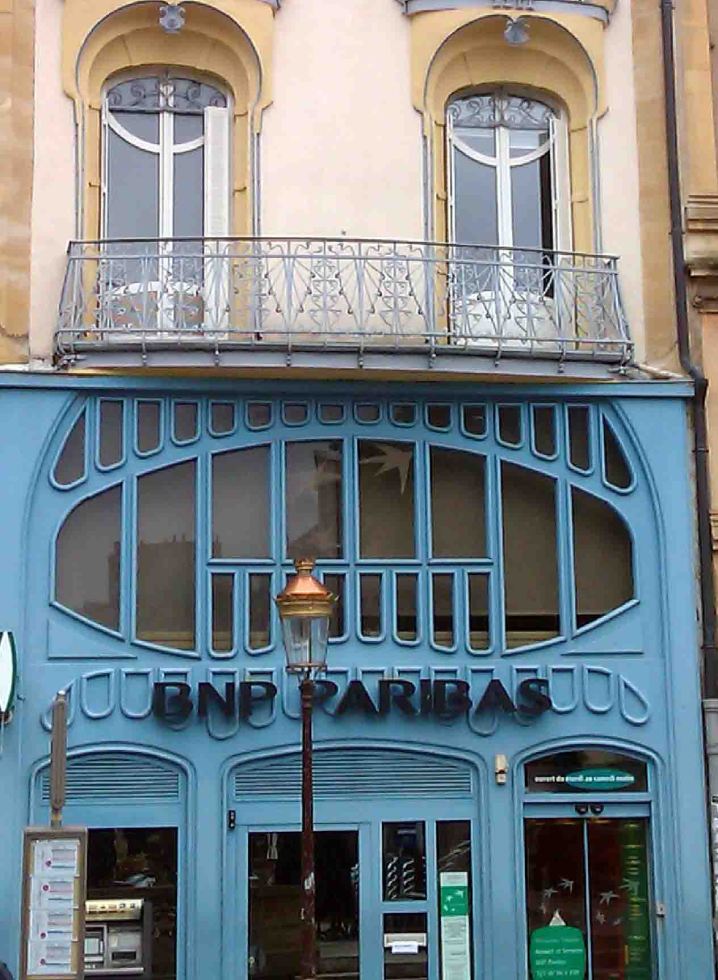 Only the older buildings refuse to take sides. The medieval cathedral is an architectural wonder, with stained glass by Marc Chagall and one of the highest naves in the world.  The arcaded place Saint Louis dates from Metz’s medieval zenith and was influenced by the architecture of Italy, though it reminded me of the main square in the Austrian city of Linz. Just like Linz’s Hauptplatz, it’s the setting for an annual Christmas market. Everywhere, the creamy local Jaumont limestone adds the harmony that its history denied Metz for so long. 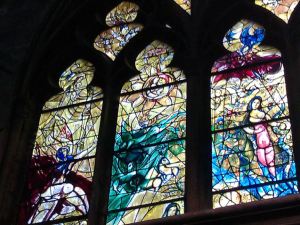 Metz is a garrison town still, and on Sunday afternoon the military threw open the gates of the military governor’s palace to visitors. It was an odd place to be exposed to the gloire of the French armed forces, for the gabled mansion still looks as though the Kaiser might pop by at any time. The soldiers were smart but very young and not particularly fierce; they looked like the sort of French boys who should be showing off to the girls with their first motorbike, their first cigarettes, their first leather jacket. 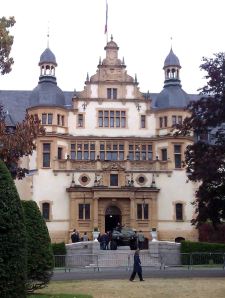 Afterwards, I returned to the railway station and chanced upon the memorial to the railway workers who had died fighting for France in the second of the twentieth century’s world wars. Their names gave human form to Metz’s unique identity: Boyon following Boehler; Gebhardt preceded by Galleron.

Of all Metz’s architectural landmarks only the newest of them disappointed me a little, for the Centre Pompidou south of the railway station has a strangely makeshift air, as though it had been run up for some expo or other and would be dismantled again when the show was over. Like many of the more expressive modern buildings it strains a little too hard to be an icon, its undulating form intended to resemble a floppy hat. I’d rather it looked like an art gallery. Posters advertised an exhibition of work by the German artist Hans Richter, who through his long career collaborated with Max Ernst and Marcel Duchamp, Man Ray and Mies van der Rohe. I liked the sense of Franco-German common enterprise better than I did the Pompidou’s slightly lumpy looks. 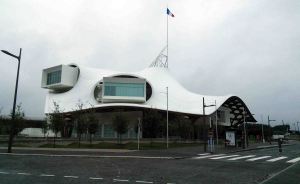 The Rough Guide to France describes Metz as an undiscovered gem, and as a contributor to that book I wouldn’t wish to argue. The old jibe that France is ‘Paris and the French desert’ has always struck me as untrue, for provincial cities are one of the things that French culture does best. In Metz as in Aix-en-Provence or Bordeaux the urbs is urbane. You’ll eat well; there’s quiche Lorraine but also pork and delicious, scented little Mirabelle plums. The wine flows, the coffee is strong; you’ll scarcely feel the need for Paris. Or for Berlin either, for that matter. 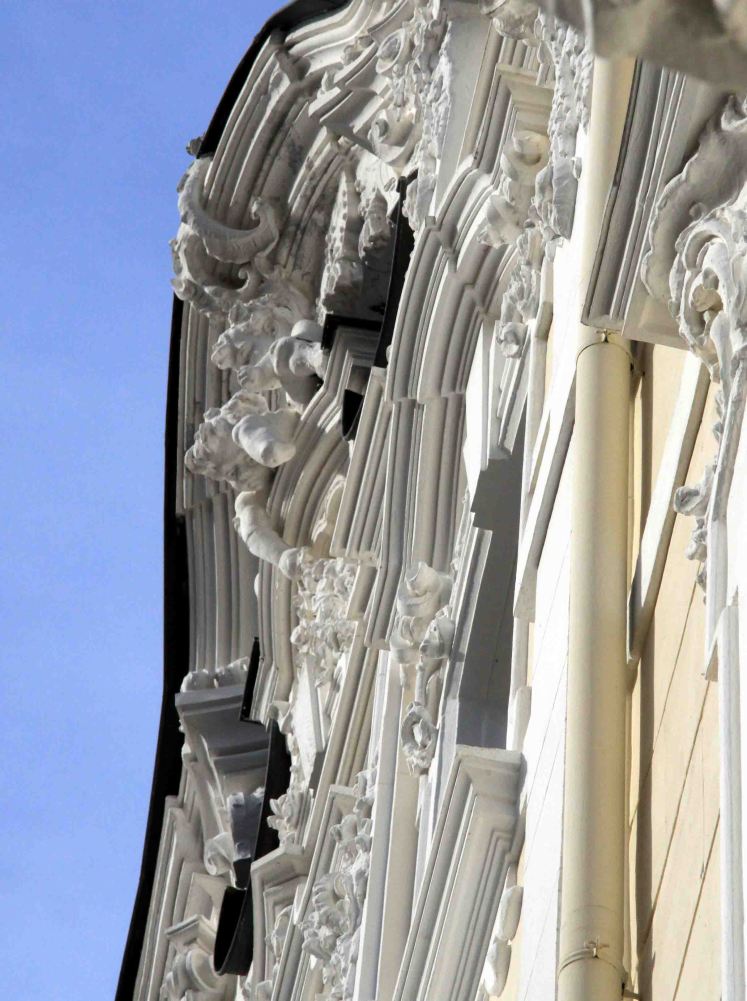 Who goes to Bad Ems these days? Not enough people, judging by the softly melancholy feel of the place when I visited one fine day in the early spring of this year. The little western German spa sits in the deep, improbably picturesque valley of the River Lahn, which is one of Germany’s prettiest. Its lovely setting aside, it has its share of historicist architecture and a fine Café-Konditorei, Maxeiner; the provision of good quality coffee and cake is as essential to the smooth functioning of a German spa as healing waters. It’s by no means the most dourly medicinal of the German spas I have visited: step forward Bad Reichenhall for that honour. And there’s the Emser Therme, a thoroughly contemporary spa complex a short distance from the historic centre, complete with indoor and outdoor pools, saunas and those mysterious beauty treatments that men like me don’t entirely understand. 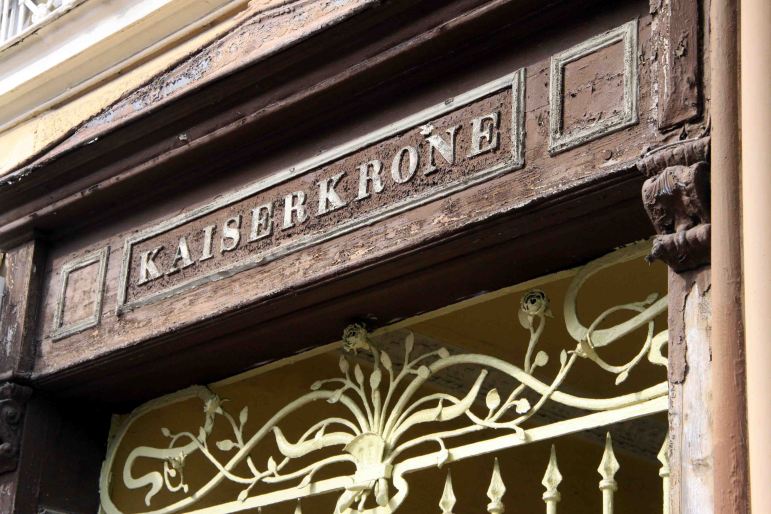 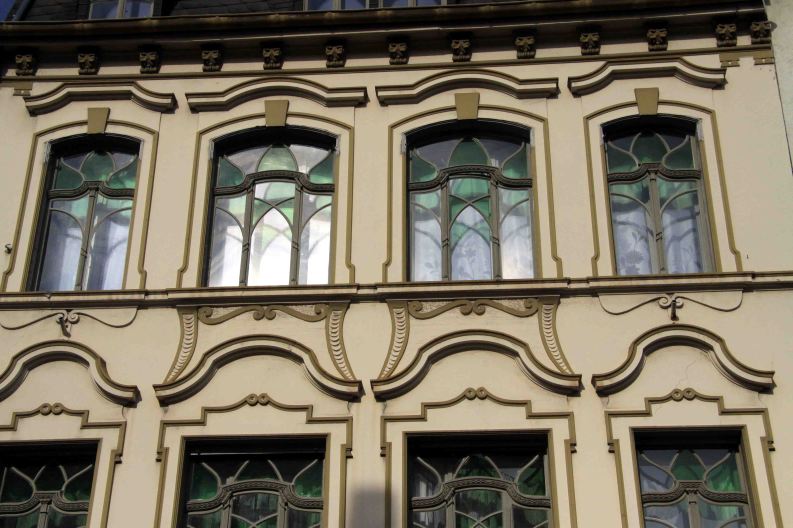 Yet for all its charm Bad Ems is in quiet decline. The population peaked in the 1970s and has been falling ever since. Unusually for a German resort, it is not immune to visible signs of decay; here and there wrought iron rusts, paint fades and varnish peels. The older of the town’s two funicular railways is slowly rotting into vandalised oblivion, a victim of the TÜV – the ferociously thorough German safety inspectorate – which decades ago declared it unsafe. Like the echoing amphitheatre of some long-forgotten Olympics, Bad Ems has the air of a place from which events have long since moved on.

And that, of course, is more or less the truth of the matter. There was a time when anyone who was anyone came here to take the waters. There’s a plaque to Jacques Offenbach, the operetta composer who was born Prussian and died French; Wagner was here and so was Rimsky-Korsakov. Goethe stopped by, but he was an obsessive traveller and there are reminders of him almost everywhere in central Europe, so that rates as no particular distinction. Dostoevsky was here too, perhaps to fuel his gambling addiction at the Spielbank.  Jenny Lind and Gogol, Victor Hugo and Eugène Delacroix all added to the cosmopolitan, artistic flair of Bad Ems in its nineteenth century heyday. The architecture is as confidently international as the guest book: there’s an Orthodox church on the riverfront with a Schloss Balmoral nearby; pre-First World War facades along the main drag confidently identify themselves as Windsor House and Zur Petersburg. 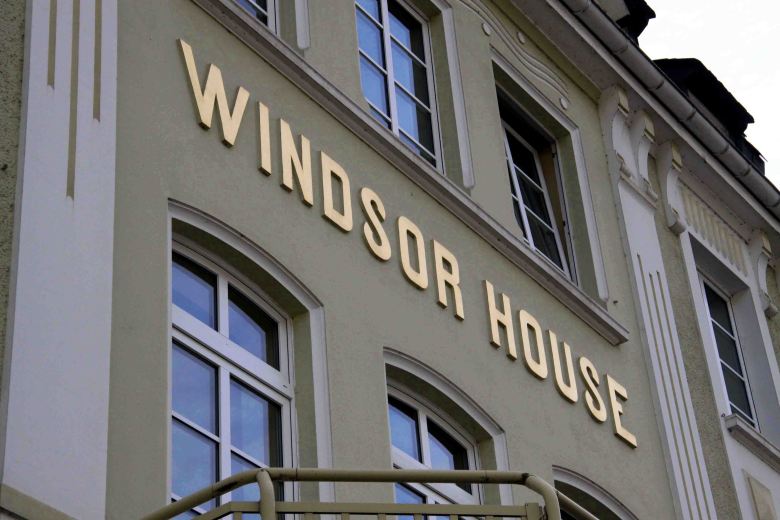 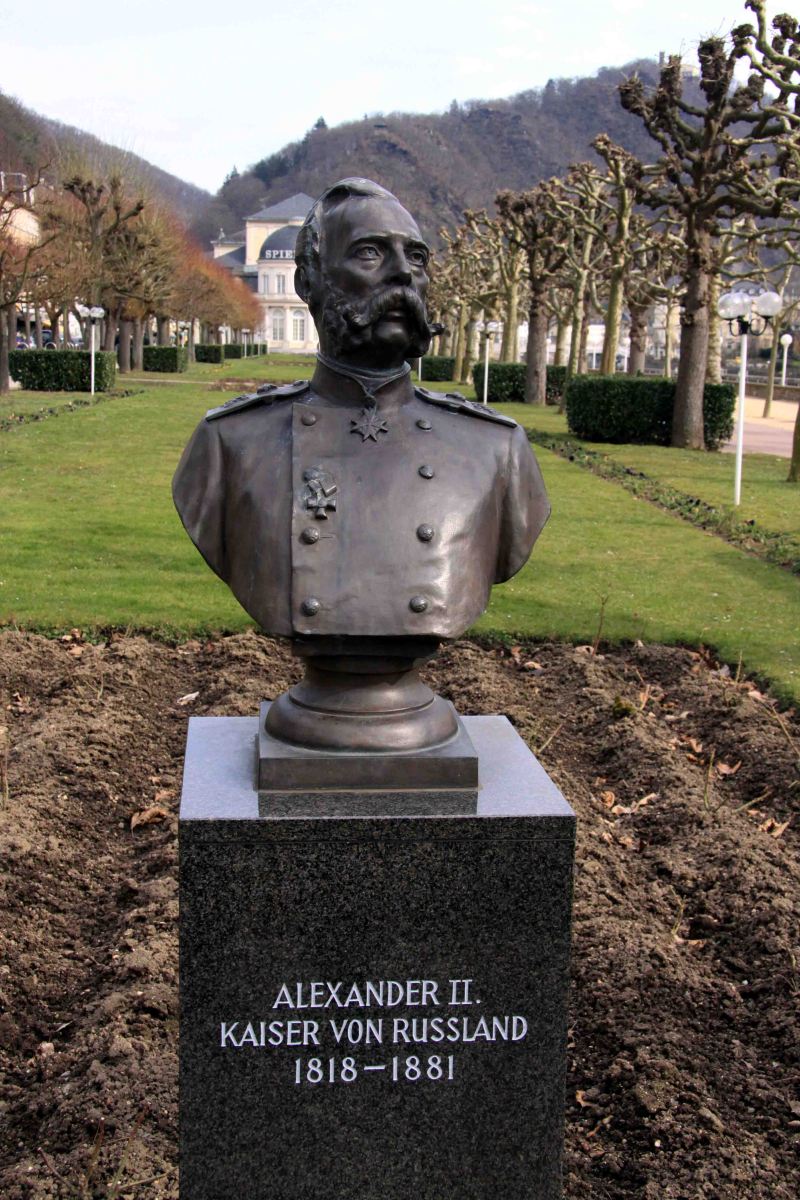 These royal names are not just the usual hoteliers’ snobby bombast. The Russian Tsar Alexander II – a nephew of Prussian King and later German Emperor Wilhelm I – visited regularly between 1838 and 1876. Something about the late spring of 1876 disagreed with him because it was while taking the kur in Bad Ems that Alexander issued the Ems Ukase, a proclamation which banned the use of Ukrainian in literature or live performance.

But Bad Ems is, of course, better known for another official communique, the Ems Telegram. On 13 July 1870 Alexander’s uncle was waylaid by the French ambassador, Count Benedetti, while taking his morning constitutional in the Kurpark. The ambassador sought assurances that no Hohenzollern would ever again be a candidate for the Spanish throne; the Prussian king politely declined to give any such assurance and sent a telegram to his Chancellor, Otto von Bismarck, giving an account of the discussion. Calculating that if war with France were to happen now was as good a time as any, Bismarck released a carefully-edited version of the message, which gave the impression Wilhelm had crudely rebuffed the ambassador. It had the desired effect. When newspaper reports were published in France the next day – Bastille Day – public opinion was outraged. France declared war on Prussia five days later and was defeated convincingly within the year. 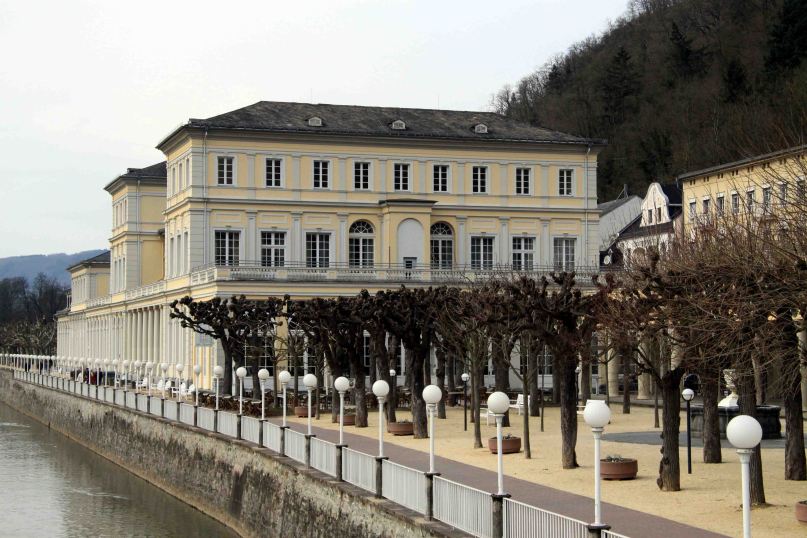 If the circumstances and setting of it all nowadays have an air of comic-opera absurdity about them, the consequences were serious enough for France, with a mighty, newly-unified German Empire for a neighbour and control of Alsace and much of Lorraine passing to that eastern enemy. But more about that in my next post.