Living in inner London, the sight of a Bentley Continental is nothing special; the occasional Ferrari raises an eyebrow only if it isn’t red. I don’t live in the capital’s most exalted neighbourhood, but even so a Maserati resides in the next street, an Aston Martin in the square beyond it. In this city of banks, luxury cars are no big deal. But tell me, when did you last see a Hillman Imp? A Vauxhall Viva? Or indeed any British car from the era when ‘deluxe’ meant a sun visor and a bit of carpet or ‘high performance’ meant Rostyle wheels and a speedometer calibrated beyond 90? Nowadays these – the cars of my childhood – are the true exotica.

I recently spent an afternoon at the Heritage Motor Centre at Gaydon, just off the M40 south of Warwick. And they’re all there – the motoring icons of a simpler, more rust- (and strike-) prone era, when garages dispensed Wynn’s and STP instead of computer diagnostics and bad cappuccinos and upwardly mobile young blades craved Dolomite Sprints, not BMWs. I was entranced.

If the much-diminished British motor industry still has a beating heart, Gaydon is surely it: Jaguar-Land Rover does its testing here; Aston-Martin has its headquarters in the village. The Heritage Motor Centre is the industry’s memory bank, and those memories are part of my family story. My father was a tool and die fitter for the firm that stamped out the bodyshells for millions of those sixties and seventies cars; the factory where he worked is, happily, still in business today. If only the same could be said for many of the hallowed British marques commemorated in this wonderful museum. Who nowadays has any clear recollection of the limousine-like stateliness of the Armstrong-Siddeley? Of the days when ministers were chauffeured in sleek Humbers? Or of a time when Wolseley wasn’t a fashionable restaurant but an unfashionable Austin with a nose job and a bit of wood and leather?

Alongside the triumphs of British motoring history – the Monte Carlo Rally-winning Minis, the E-Type, the gorgeous Jaguar XK120 – there is an unmistakable undercurrent of melancholy at Gaydon. So much of the glory commemorated by the collection is gone, never to return, as though Lord Nuffield had been an automotive Ozymandias. Look on his office – lovingly recreated here – and despair. Adieu Austin, bye-bye BMC, tara Triumph. Alvis has long since left the building. Even Ford, whose Cortina became part of British motoring’s DNA, no longer makes cars in Britain. There will never be Dagenham Dustbins again.

Among the saddest, but also the most intriguing exhibits are the stillborn concepts and prototypes that never made it into production. Some are pure oddball – a twin-engined Mini Moke, a slightly unhappy Rover SD1 estate – but some are inspired, like the startlingly fresh 1981 Leyland ECV3 energy conservation vehicle, a bundle of aerodynamics and efficiency that could produce 100mpg and 115mph from a 1113cc, three-cylinder engine. Take that, Toyota Prius. As for the opportunities missed, consider the 1968 Austin Ant, a Mini-based small SUV with four-wheel drive. No call for it, said British Leyland management; Suzuki was later to prove them wrong. Or ponder Alec Issigonis’ neat, angular 1969 study for a Mini hatchback. Again, Leyland management passed on the idea, even though it was BMC who first invented the hatchback, in the unsexy shape of the Austin A40.

Issigonis wasn’t the only one to see the writing on the wall. By the spring of 1975 it was clear that the strife-riven British motor industry was falling behind its continental competition, and the VW Golf, the Renault 5 and the Fiat 127 were mopping up sales that ought rightfully to have gone Britain’s way. At this stage an earnest young draughtsman submitted concept sketches to Leyland supremo Donald Stokes for a hatchback reworking of the Mini that was much simpler than Issigonis’ boxy proto-Metro. The proposal wasn’t taken seriously, perhaps because the sketches were mine and I was 11. The letter I received from Lord Stokes was gracious, but its air of complacency in the face of impending doom infuriated me at the time. That nice man was fiddling while my dad’s livelihood burned.

Who knows what might have been, if Stokes had listened to me or to Issigonis. Perhaps Gaydon would still be a Rover test track rather than a Jaguar-Land Rover one; perhaps MG would be more than a Chinese-owned minnow and I would actually have seen an MG6 by now. And perhaps the Heritage Motor Centre wouldn’t be what it is: an automotive farewell symphony to tug at the heartstrings of any patriotic petrolhead.

The Heritage Motor Centre is at Gaydon, Warwickshire, off junction 12 of the M40. Open 10am-5pm daily. http://www.heritage-motor-centre.co.uk 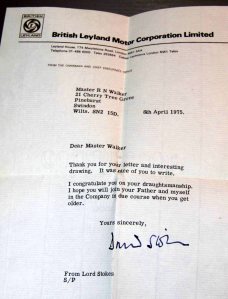